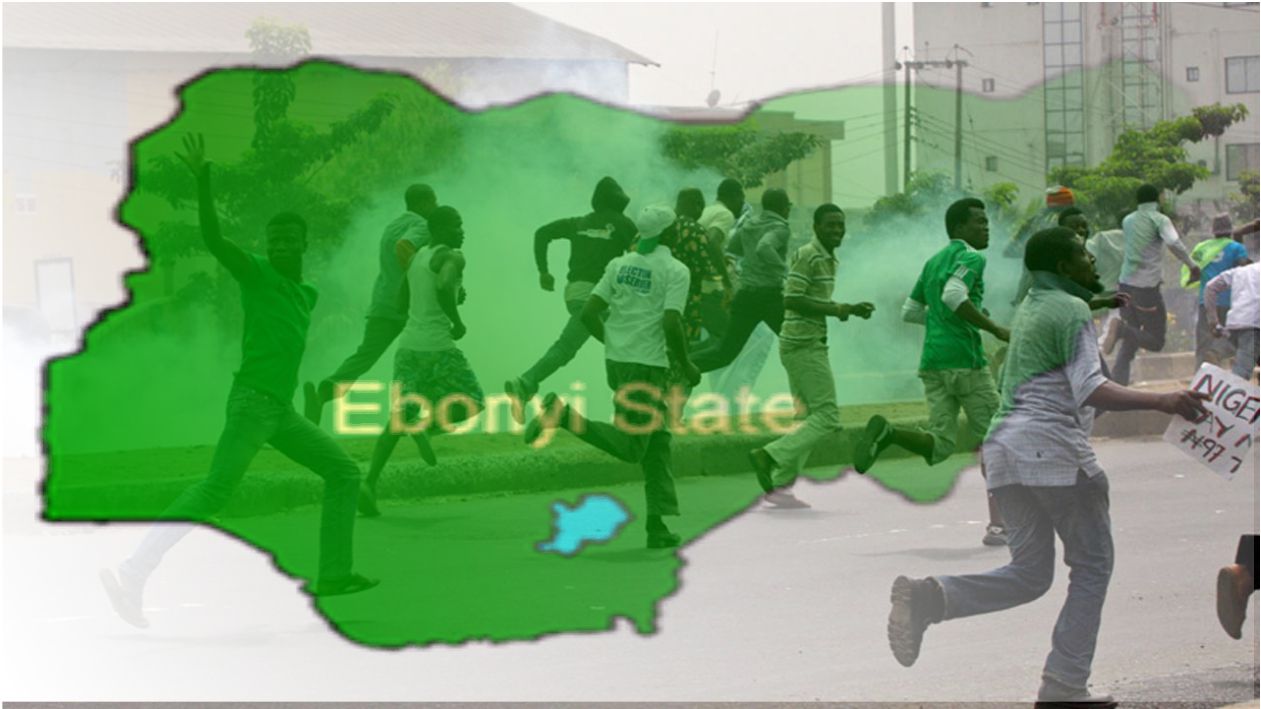 In Abakaliki the capital city of Ebonyi state, the activities of commercial banks were paralyzed and put to stop on Thursday, April 29 2021 by Ebonyi state government and bank managements.

The state government said they got intelligent notification that the Eastern Security Network ESN have plans to attack commercial banks in Abakaliki Ebonyi state capital.

This is one among the numerous evil plots by the Ebonyi state government and the Nigeria federal government to justify their efforts to paint black on the image of the ESN, and label it evil and tag them  Terrorists, the Nigeria government equally wants to use the strategy of setting up thugs and armed men to attack and rob banks and other businesses of Biafrans and the oppressed indigenous population across the failed state of Nigeria to  confuse some gullible in Biafra land and the international communities to agree with them that ESN and IPOB are Terrorists group.

IPOB led by Mazi Nnamdi Kanu is a legally backed organization, peaceful and unarmed freedom fighting group of people across the globe, they’re highly recognized all over the world in over one hundred countries of the world including Britain, USA, Germany etcetera.

ESN on the other hand is a security outfit formed by Mazi Nnamdi Kanu when the need for it climbed the highest degree in the Old Eastern region and Biafra land. Their works are to safeguard the bushes and farmlands of the helpless Biafrans from being destroyed and persons killed by the Fulani Herdsmen Terrorists hoovering the entire states of Biafra land.

ESN do not attack banks and the businesses of Biafrans and other indigenous populations trapped in the cage of one Nigeria British contraption, irrespective of where they may be, ESN volunteered to help the fight against Terrorism ravaging Nigeria and Biafra land by the Fulani perpetrators, unfortunately the Nigeria government and her security operatives both the army and police instead of giving kudos and appreciation to ESN for their help in the fight against the blood sucking terror demons in human form, they turn to attack the ESN and kill innocent IPOB family members as well as  abduct many that are being incarcerated in their various dungeon prisons across states in Biafra land and the entirety of  zoo known as Nigeria.

So Many innocent citizens of Ebonyi state and Family Members of IPOB in the state  has been secretly abducted by the Nigeria Police and the army through the help of EBUBEAGU the newly formed shadow  security outfit by the south east governors, many were taken to unknown location while many are currently in the Nigeria Police Headquarter Abakaliki, many has equally being murdered while the remaining others are being persecuted, suffering series of inhuman treatments and degradation in the hands of those brutal officers which they’re equally agitating for their wellbeing and the bright future of their posterity.

One should not misunderstand IPOB, ESN and their activities, ESN are not criminals that robs commercial banks, ESN don’t destroy properties owned by Biafrans or any indigenous person across the contraption called Nigeria, ESN are not Terrorists rather they help in the fight against Terrorism in Nigeria and Biafra land as being perpetrated by the Fulani Herdsmen,

The world should take note and Biafrans should be guided because the corrupt politicians handling the failed contraption called Nigeria particularly in Biafra land and Ebonyi state especially the governors,  are living no stone unturned in trying to change the narrative and tag IPOB and ESN Terrorists organization, thereby tarnishing their white image before the international communities and the oppressed Biafrans whom they’re fighting to liberate and shrink the wide support gained so far by ESN from the people.

The Nigeria government are trying to perfect this evil plot against the innocent people of Biafra being oppressed in their land with the help of the British government to favour the illegally migrated Fulani Herdsmen Terrorists that wants to take over Nigeria and Biafra that an inch does not belong to them at all cost.

IPOB family members and Biafrans should be more security conscious, being brothers keepers and maintain brotherly love as well as shun act of sabotage and focus to fight the battle for their freedom and total emancipation from slavery in their own land now, Biafrans should know that they are facing numerous enemies at the same time, both internal enemies which are mainly the corrupt politicians, Fulani Herdsmen Terrorists their colleagues in the Nigeria Army and police as well as their sponsors in the government and Abuja.