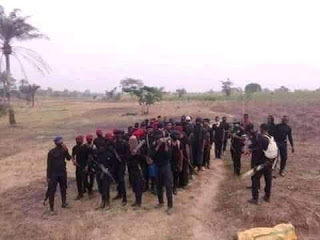 Don’t allow yourself to be once again deceived with the shenanigan by Fulani slave Igbo governors’ regional security. Contrary from what was showcased to South East region, the travesty suspicious parallel security is no doubt was to counter peoples’ oriented Eastern Security Network (ESN), launched by the Indigenous People of Biafra. The South East joint security outfit with Fulani controlled pseudo code Igbo name; Ebube Agu Security Outfit, held in Owerri, Imo State, was more or less to replicates half way the Rivers State Governor, Nyesom Wike’s owned parallel security outfit with just four hundred men. The end justifies the means. Rivers State little Hitler Nyesom Wike, can’t stand firmly to account for those men and women he risked their lives not to talk more of resignation letters tendered by the surviving security escapees while they encountered Eastern Security Network.

Before the South East governors could ends their jamboree regional security meeting, Intersociety saw the handwriting on the wall, the unholy romantic affair going on with the South East stooges and their vampiric paymasters will inevitably stir something gruesome to both parties, that history will never ceases to recount. As Intersociety reminded Igbo governors of same mistake of 2019 illegitimate and unpopular “Community Policing” arrangement by the same South-East governors during which all the security chiefs that attended the meeting where the decision to use “Community Policing” to checkmate menaces of Jihadist Fulani Herdsmen in the South-East Region were made up of officers of Fulani background,’ Umeagbalasi stated. Likewise, the recent South-East security meeting held in Owerri, Imo state, won’t see the light of the day as Fulani security stakeholders were in attendance to determine the outcome of the security formation.

Perusing the communique of the security summit of the South-East governors, one will be expecting to hear something interesting to ginger the minds of the already marginalized security challenged Easterners, but with their collective resolution, they have finally hit themselves in the legs. Barely 24 hours of forming the Ebube Agu Security Outfit, Fulani terrorist herdsmen attacked Ebonyi State. Probably, to make mockery of South-East governors laxity, the same newly formed Ebube Agu security turned to be Ebube Aturu security outfit when Fulani herdsmen were on rampage in South-East governors Forum Chairman’s state, Engr. Dave Umahi. In order to cover up, Engr. Dave Umahi shamelessly denied Fulani herdsmen attacked in his state, by linking it to communal crisis, somehow exposes Ebonyi residents to be vulnerable for further attacks by marauding Fulani herders, lots of abound that Fulani terrorist herdsmen carried out the attacks in Ebonyi State.

Imo State Governor, Hope Uzodimma’s careless accusation that Indigenous People of Biafra – IPOB, was behind the recent epic prison break in Owerri Prisons was either to give the dog a bad name or he the Supreme Court made Fulani Administrator in Imo State, is no longer perceiving the smell of excreta that the Nigerian Police and its counterpart the Nigerian Military brutality against innocent masses in the South-East gave rise to reinforcement attacks against security formations by saint unknown gunmen all around Eastern region. Perhaps, South-East governors may have forgotten days are gone when rubber stamp political self-acclaimed leaders will jump out from their various snoring slave beds to enforce what‘s untenable against the collective interest of the masses as seen in the Rivers State governor, Nyesom Wike’s gimmick of trying so hard to claim tough but failed awfully this time.

Everyone is aware of the government attached Fulani controlled security failure. Ebube Agu security is a scam, peddled by South-East governors to calm the masses inquisitiveness to arm themselves for self-defense. As it stands now, the cat has escaped from the bag, nullification of government controlled security in replacement of generally acceptable peoples’ oriented Eastern Security Network ESN, superintended by IPOB leader, Mazi Nnamdi Kanu, remains the only reliable and reorganized Security in the entirety of the defunct Eastern region boundary that constitutes Biafra land. Failure of the government to uphold its assigned constitutional responsibilities for good governance without ethnic sentiment disengages government to dictate the future of the people, rather, it is now the responsibility of the masses to dictate their future. And their future is safe with Eastern Security Network because they already know that Ebube Agu is a mockery to the safety of the people.

Ebube Agu security outfit is a mere costume to cover the puppets being controlled by Fulani oligarchy; of course, without been told the pseudo name “Ebube Agu”, was given to South-East slave governors by Fulani oligarchy to ridicule the Igbo heritage, as Igbo socio-cultural organization Ohaneze Ndigbo, works hand in hand with politicians in messing up with Igbo’s dignity in the name of politics. In a nutshell, with the recent abduction, bombing, killing and maiming going on in the South-East, one begins to wonder why the so-called glorious lion (Ebube Agu) security outfit could not condemn the atrocities meted on our people by the Fulani terrorist herdsmen from Futa Jalon, not to talk of confronting the culprits head on like ESN does.

This column correlates with the initial assertion made, that the name of the security outfit is just a showy misrepresentation intended to conceal something unpleasant, or an illusion to cover up the cowardly nature of the South-East slave governors to look as if they are in charge of their various states, whereas, in reality they are puppets taking orders from their Fulani caliphate masters.

Finally, seemingly contradictory nature of the communique, maybe South-East governors thought they can continue fooling their fellow citizens without knowing everybody understands the impede outcomes of the already scam security formation. Going through their sham contradictory communique, which number 14 and 15 is quite laughable that banned open grazing, with the help of Ebube Agu to carry out the implementation and at the same time encourages famers-herders “perfect” relationship.

What does farmers have in common with herders when open grazing is ban?. Famers-herders crisis was as a result of Fulani herdsmen open grazing in someone’s farmland. See how these political criminals are toying with peoples’ lives, and future. This tells you all you needed to know that if you sheepishly entrust your lives in the hands of South-East governors’ parallel security outfit is at your own peril only Eastern Security Network – ESN, remains the only entrusted fortified security network within entirety of the defunct Eastern region.