Confusion As The Dethronement of Igbo Political Leaders Thickens 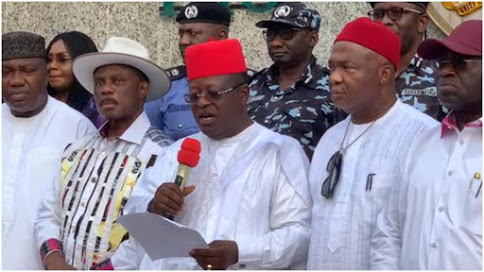 We have seen as those that called Mazi Nnamdi Kanu names and mocked Biafra agitation continues to wane. Comments like “online country, miscreants, Biafruad and other unprintable names have gradually disappeared from social media space.

The worse is that the ever shouting Gov Wike of Rivers State who always claim to be too powerful, have bought some sense because of the state of the nation. I was surprised to read his recent press release on what is happening in Rivers State. The governor who has franchise in accusing people he hates albeit wrongly, now accuses no one.

He even refused to go after people living in Obigbo and it’s environs like he did during the #EndSARS protest. I heard that Mazi Nnamdi Kanu said never again will Obigbo massacre repeat itself and that was loud enough and was felt.

However, this could be that the governors in the East (South East and South South) now takes instruction from IPOB Leader. Recently,  someone jokingly told me that the governors now think of what Mazi Nnamdi Kanu will say before acting or dishing out junks. Now I understand that jokes have a way of portraying the truth.

With these, I am compelled to ask; could it be that Igbo political leaders have been dethroned? I have in my numerous articles opined that a time will come when Igbo leaders will be dethroned and disenfranchised. I even added that they will go on self imposed exile.

The happenings of today have proven that the governor in the East are no longer in charge of the affairs in the states. The people listens to no other person than Mazi Nnamdi Kanu. As it stands now he is the only person that can say a word and it is carried out to the later. Who is in Imo State? How is the supreme Court administrator fairing? This will be dissected in a separate article.

The pronouncement by the IPOB Leader Mazi Nnamdi Kanu about the renaming of Douglas Road and Douglas House would have been meted with mocks and caricature from paid e~rats. They would have taunted IPOB by now over it, but I am not seeing their handwork or maybe leadership has changed hand. Could it be that they too have learnt their own lessons and borrowed a leaf from the governors? It seems everyone of them knows the truth; that Mazi Nnamdi Kanu and not their criminal governors is in charge of the affairs of the East as of now.

Do you doubt if that name will stand? Do you know what it means to die for what one believe in?  Douglas Road might for now remain Douglas Road in the Nigerian system, but the people has from 28th April started calling it Ikonso Road as directed by Mazi Nnamdi Kanu.

Every of our predictions have all come to past and fulfilment. Eastern politicians have been dethroned while Nnamdi Kanu is now the one ruling from exile. However, the Fulani stooges back home can do nothing.

Who is still in doubt? What are you doubting? That Biafra is not coming or that Mazi Nnamdi Kanu is not in charge? Only time will tell.