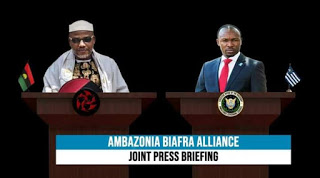 The  Gulf of Guinea  supplies around 40 per cent of Europe’s oil and 29 per cent of the U.S.’s, oil demands , with an  effective regional  cooperation, Biafrans and Ambazonia , these  emerging nations  are capable to disrudisrupt  this fragile business route and turn  it to become another Gulf of Aden. In fact, if they choose to go harder on their quest for freedom it will  threaten the  maritime trade  and destabilize all the costal region countries  just as it’s happening in East Africa coast .

Criminal groups will  quickly and appear along the coasts of Cameroon, Equatorial Guinea, São Tomé and Príncipé, Benin and Togo, taking advantage of troubles that are about erupt in those regions .

With recent happenings it’s clear that Biafrans and Ambazonia’s have all decided to take their faith in their hands  and are determined to liberate their people from neo -colonialism and they are not hiding their intentions on possible joint military operation in the Gulf of Guinea .

It’s a collective failure on the part of those  coastal countries as  these coastal regions have been unable to control their economic activities in their maritime zones and in international waters and also ensure the development of their coasts.

This collective failure has created a major opportunity for criminal networks that feed on the needs and resentments of local communities. piracy is a recent phenomenon in the region, its root causes are much deeper than  one might think , beside, the Gulf of Guinea also witnessed the slave trade business hundreds of years back  which contributed in making the problem much more deeper

Only a  complete independence for Biafran and Ambazonia is the only needed measures to reverse this trends of criminal and under development in the coastal  region , their independence will improve governance of the economy and security sector of the coastal region because  they are capable of initiating comprehensive and effective maritime public policies and practical regional cooperation beyond declarations of intent.

Therefore the western world has a choice to help in the liberation of these emerging two nations  or face the worst regional crisis witnessed in modern history .