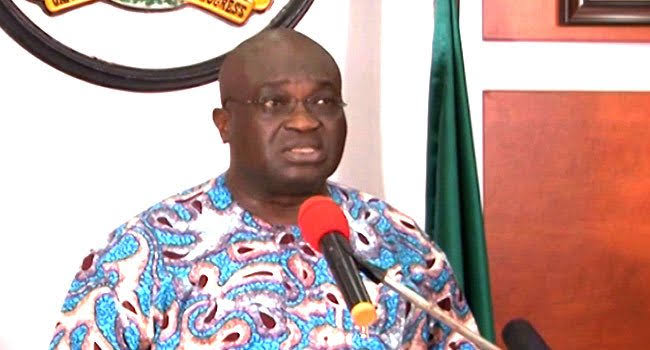 The Abia State Governor, Okezie Ikpeazu has finally spoken up amdist the evolving but totally uncomfortable developments especially, amongst the people. He has eventually agreed that the issues of marginalisation and inequality raised by Mazi Nnamdi Kanu, the leader of the Indigenous People of Biafra (IPOB), are undeniably valid.
During a visit to the Osasu Igbinedion Pan-African Television Studio in Abuja recently, Governor Okezie Ikpeazu validated the claims of IPOB and it’s leader, Mazi Nnamdi Kanu concerning the ongoing insecurity and inequality in the country. He said, “If they were issues of injustice, marginalisation and inequality, any part of the society has a right to begin to feel cheated or unwanted. People are beginning to think now that some of the issues raised by Nnamdi Kanu are legitimate. Some of us can see it. We cannot continue to hide behind a finger.”
He  further expressed his confusion on the strategies being employed by the group.  “….Some of us do not subscribe to his (Kanu’s) style or strategy, because I do not understand where he is going, how he is going and when he plans to pull the break (up) and what he wants to achieve.”
Expressing more about his views, the governor said, “If I have a way of conveying my views to the leadership of that group, what I will say is that they should find a way to enter into conversation and let people know”.
Mazi Nnamdi Kanu’s pronounced strategy has been the application of civil disobedience in pressing home his demands for the freedom of his people. In his various Radio Biafra broadcasts, Mazi Nnamdi Kanu had stated how his adoption of Martin Luther King Junior’s and
Mahatma Gandhi’s forms of civil disobediences would lead to the “restoration of Biafra”. In an interview granted to Newsweek publication, Nnamdi Kanu opined his belief in the teachings of both Martin Luther King Jr. and Mahatma Gandhi when he said, “I hope that what we are looking for can be accomplished peacefully. I am an advocate of passive resistance. Mahatma Gandhi and Martin Luther King Jnr. tried it to very good effects, so why should it not work in our case?” (Wikipedia)
Definitely, more eyes and minds are beginning to open up now.
Written by Eme Onyemachi Gabriel
Edited by Chukwunyere E. Emenogu
For Family Writers Press International