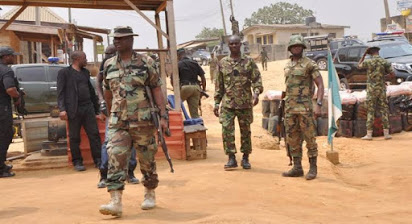 Alarm is being raised concerning the redeployment of the Nigerian military to Imo State by Governor Hope Uzodimma. This was confirmed through one of the recent tweets made by Mazi Nnamdi Kanu, the leader of the Indigenous People of Biafra (IPOB).

He wrote “DANGER! There is a confirmed report of sightings of Nigerian Army’s drone over Mbaise, Mbano and Obowo, with additional number of Hilux vans moving into these areas right now. Men MUST be at alert to repel these terrorists in uniform. Imo State is the battle ground. We must defend our land!

Block every entry point into Mbaise, Mbano and Obowo. Trap and eliminate them.

Those with internet access should relay their movements live on social media from a safe location”.

It could be recalled that it is not yet up to a week that the same Nigerian military killed Ikonso, the Commander of Eastern Security Network (ESN), in Imo State, based on the invitation of Governor Hope Uzodimma. The Nigerian security forces it can be observed, only major and pleasure in attacking and killing unarmed, innocent civilians especially Biafrans. In less than three months now, the same Imo State Governor had invited the military to Orlu where many people were killed, maimed and arrested, and properties worth fortunes, wantonly destroyed.  Helicopter gunships were deployed in that mayhem. Another redeployment of these security forces has been orchestrated to launch attack on the people who have definitely committed no crime.

Governor Hope Uzodimma should be queried about what offence Biafrans in this part of Biafraland have really committed against him, to warrant this array of humiliation and degradation. He should be bold enough to step out from his hiding, to clearly tell the world what his intentions really are even after robbing them of their election mandate and preparing to yet depend on them for a return for his second tenure.