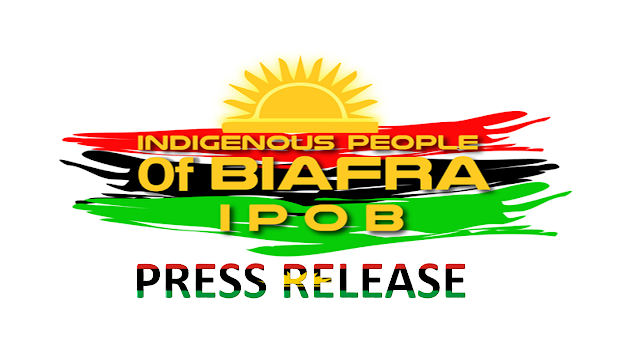 The attention of the global family of the Indigenous People of Biafra (IPOB) ably led by our great and indomitable leader Mazi Nnamdi Kanu has been drawn to the recent pronouncement by the hypocritical Nigeria Broadcasting Corporation (NBC) that they have suspended and fined Channels Television for conducting a live and uncensored telephone interview with our Media and Publicity Secretary, Emma Powerful on their prime time news show.

This irrational, draconian and hypocritical action of the Federal Government through its agency, the NBC, has simply confirmed our long-standing position that Nigeria is currently under a tyrant whose mission is to actualise total Islamisation and Fulani conquest of the country. We are not surprised, but along with all good men and women of conscience, we strongly condemn, in the strongest possible terms, this wicked and undemocratic action. How many times has the Islamic cleric, Sheikh Gunmi, met with Fulani terrorists and Fulani bandits and the outcome of their parley aired on national televisions without NBC bathing an eyelid? How many times has the Boko Haram leader, Shekau’s message and threats been aired uncensored on national television without NBC imposing any sanctions on NTA? We have always said it that Nigeria and its security agencies lose sleep when a matter has to do with IPOB and Biafra.

Nigeria has not sanctioned her Minister of Communications, a known terror apologist and stunch supporter of mass murderers yet she is using state instruments of intimidation against an innocent media house for interviewing a spokesperson of a persecuted people. Why is Nigeria always afraid of the truth? After spreading blatant falsehood about how it murdered Ikonso the Imo State Commander of Eastern Security Network (ESN), IPOB was contacted to put the records straight, after which all hell broke loose at NBC. That Aso Rock viciously and wickedly turned against their long term buddy, Channels Television, tells you all you need to know about Fulani Janjaweedism.

It confirms that you can’t be friends with this bunch of hardened terrorists in power in Nigeria. Nigerian media initially failed to investigate and report the accurate information about the death of Commander Ikonso and those with him. Sections of the media only peddled lies and fake news dished out by the same security agencies that murdered Ikonso in his sleep. The bitter truth the Nigerian Government didn’t want people to hear, which IPOB disclosed at the said interview, was that Ikonso was murdered in his father’s house, not in any imaginary ESN camp or battlefield as the liars would hope to have us believe.

The same Army, Police and DSS in Imo State that never for one day arrested or prosecuted any Fulani terror herdsman ravaging Imo State before the coming of Ikonso; the same Nigerian security agents that have always provided cover for terrorists and bandits, had the guts to ambush and kill the only man that drove Fulani terrorist herdsmen out of Imo State.

Something Hope Uzodinma, Ohaneze Ndigbo and those Efulefus that conspired to kill him was not able to do. Commander Ikonso and the men with him in his father’s house were murdered by the Nigerian state with the help of APC politicians and Ohaneze Ndigbo leadership in Imo State. The worst part is that they lied about it. The Federal Government of Nigeria knows they cannot suppress the truth as far as IPOB is concerned. We will always put the records straight because the facts will always speak for itself.

We are not Miyetti Allah, and we don’t kill or attack innocent individuals but Fulani terrorists herdsmen masquerading as cattle herders in our bushes and forests. This was the mandate of ESN and the cause for which Ikonso, a hero and gallant, patriotic Biafran and his men were murdered in cold blood. Commander Ikonso was only defending the land of his ancestors. He was murdered with the active connivance of Hope Uzodinma, George Obiozor and APC politicians in Imo State. They wanted to cover this atrocity, but when Channels Television gave us the opportunity to tell the truth, the murderers in uniform and their masters in Aso Rock became offended.

The action of NBC against Channels Television is only meant to gag and intimidate the press into total submission. It’s part of the calculated attempt towards suppressing the press and blocking the outside world access to atrocities being perpetrated against indigenous peoples in Nigeria. This is how they hurriedly and unjustifiably proscribed IPOB and tagged its innocent member’s terrorists without according the movement the right of defence in a law court. Nigeria is a country where injustice, hypocrisy and falsehood hold sway.

The same security operatives that cannot withstand bandits and terrorists are zealously hunting down and killing IPOB members and supporters. While they are busy searching for innocent freedom fighters, the real terrorists are busy taking over Northern communities without any resistance.

MEDIA AND PUBLICITY SECRETARY FOR IPOB