IPOB’s Displeasure Misinterpreted As A Death Sentence To Igbo Governors 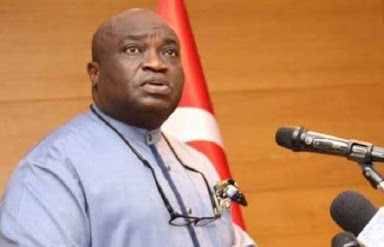 The Governor of Abia State, Okezie Ikpeazu, recently claimed that the leadership of the Indigenous People of Biafra (IPOB) has already marked the South-East Governors for execution, This followed a very strenuous order from the leader of IPOB, Mazi Nnamdi Kanu, for the arrest and prosecution of the just reinstated Abia State Police Commissioner, Ene Okon, within fourteen (14) days period for championing the mass murder of Biafrans in Abia State in 2017. According to Mazi Nnamdi Kanu, if that is not done within the given time frame, he will open the gate of hell in the state.

As a result, an interestingly fearful thought began to spring up from governor Ikpeazu’s mind. And I must say yes to him because they have turned to elders who seat in their comfort and watch the goat give birth in tetters. They have turned from being good shepherds into butchers of their own people. And the time to challenge such leadership has come.

Bob Anderson and Bill Adams, authors of “Mastering Leadership”, said that “leaders need to keep their promises, set the right strategic direction, keep the organization on track, execute efficiently and effectively lead the organization to produce results that sustain businesses. And depending on where you sit within the organization, you may be expected to set a vision that captures people’s imagination and provides inspiration to engage employees meaningfully and of course, model how people are treated and valued”. All these are what the South-East Governors never put into consideration while dealing with the people that elected them into office.

They have continually failed to understand that being a leader, your  reputation is critical to your success and that of the people you are leading. Your reputation is the overall quality or character as seen or judged by people in general. It should completely be the recognition by other people and not what you think.

Quite apparently, the contrary has become case with these leaders. In the whole of the South-East, if vote is to be casted on the leadership reputation  of our politicians, it will be extremely hard to have any of them score up to five percent (5%) mark because the people have lost confidence in them. That is why Okezie Ikpeazu is very correct to say that IPOB have passed death sentence on them, but he should also know that it is not only the South-East governors that are involved, it also includes all Igbo leaders ththat have turned against the masses in their quest to please their Fulani masters. It will be so because they have failed to represent the aspirations of the people. Governor Okezie Ikpeazu and all other Igbo leaders should know that Igbo youths are tired of being sold out in exchange for selfish political gains. They all deserve to die for becoming nightmares to the same people that trusted them for their security.