Is Ebubeagu Security Outfit Really Formed To Protect The South-Easterners

Some weeks back, the governors of the South-Eastern part of Nigeria, released a communiqué of their meeting at Owerri, Imo State, that they have formed a security outfit named “Ebubeagu”, to protect the South-East. This particular announcement attracted mixed reactions from millions of persons nationwide, with over 90% of South-East indigenes rejecting the security outfit.

Some people have called it a faceless security organization because it was announced without presenting the make-up personnel to the public.

Likewise, no budget or modus oparandi were made available.

But if we may recall, there has been much need for the security of this region since 2019, to the point that Fulani Herdsmen stated that they were going to help form the security outfit for the South-East.

On 27th June 2019, the Chairman of Miyetti-Allah Cattle Breeders Association (MACBAN) in the South-Eas zone, Alhaji Giddado Sadiq, spoke in an interview on how then then proposed Fulani vigilante outfit was to work in communities of the South-East States. When he was asked what the details of the proposed vigilante establishment in the region was,  he replied: “the proposal is that wherever one chooses to live, he has to make sacrifices and do what will bring peace in the area.

Alhaji Giddado continued by saying that anyone who reads the Newspapers will notice that there are so much criticisms against the Fulani herdsmen, the Fulani in general or those of Northern extraction that are resident in the South-East. So they have to do whatever is within their reach to redeem this name. 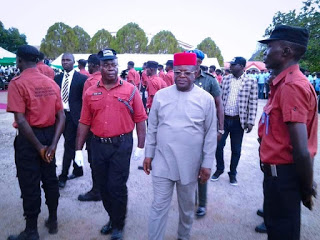 He asserted that there is no race free of criminals and it is therefore not good to say that everybody from the race is a criminal. Going further, Sadiq stated clearly that they want to come out to work with the people that they know. In his own very words, “Fulani herdsmen here in the South-East or any other place, are looking for greener pastures to raise their cattle. They are not here to bring about violence or to make troubles. So, that is why we want to redeem our name and for people to see us as peace loving people. This vigilantes we are talking about, are not going to work on their own, but they will be under the supervision of their hosts or under the supervision of the Fulanei”.

He was also asked about how the Fulani vigilantes will be able to work with their hosts when they (Fulanis) live in the bushes.

He answered: “Most of the clashes we are having between farmers and herders are about the destruction of crops or killing of cattle. If we have a task force or vigilante groups from our own side and whenever a report is made to me as a leader, like in a recent report made to me at Uzo-Uwani, which I assigned four boys to go and assess the destruction, value the destruction and make sure that the owners of the cattle pay compensation to the farmers, things will be made much easier. This thing cannot be done with only the Fulanis, at least the host will be there, the governor’s aide will be there, they will go and carry out assessment and after which, they will know the Fulanis that are responsible for the destruction. This is how they can work. Whenever there is a report of anything, these people will go. If the person responsible is from our side, they will know”.

He was also asked “if it meant that the Fulani vigilante boys will join the community vigilante groupto work together” His answer was, “that is what I mean”.

The interviewer also asked him, do you mean they (Fulanis and local the vigilantes) will all together become guards at night and in daytime in the communities? And he said; “The Fulani vigilante is inside the bush and for any fault that is attributed to the Fulanis, they will be invited and they will guide the vigilantes of the locals on what to do. If it is their own people, they know how to get them, if it is destruction of farm they will join hands to make sure there is sanity in that area”.

Does the whole thing not sound trickery to you?

Having known how self-centered and treacherous our politicians and Ohaneze NdIgbo have been, no one needs to doubt whether they have bought into these tricks of the Fulanis or whether tthe Fulani terrorist herdsmen will be the make-up of this Ebubeagu Security Operatives.

Without being told, this is a pure hand of Easu with the voice of Jacob. The naming was done by the South-East Governors and Ohaneze, but the formation was by Miyetti-Allah Cattle Breeders Association (MACABAN).

For them to form the security outfit without showing the officers that are going to do the work, is a clear indication that they are going to sell baboons in place of monkeys to us.

And understanding the fact that these politicians are stooges and errand boys of the Fulanis people who can not do anything without inviting or seeking suggestions of the Fulani leaders is another good reason to consider before accepting the faceless security outfit (Ebubeagu).

Another point to consider is how much love has these our politicians shown us in the past?

Many at times, when our people were being killed by these Fulani terror herdsmen, how much did these South-East politicians react? What measures did they try putting in place to avoid subsequent heinous crimes from being perpetuated by these marauding vampires from the Sahel region?

With all these said,  no reasonable Easterner needs to think twice about outrightly rejecting Ebubeagu or whatever name they what to give it.

Eastern Security Network (ESN) of the Indigenous People of Biafra (IPOB), is the only security outfit we know and endorse for the South-East.