Mazi Nnamdi Kanu, The True Prophet Of Our Time 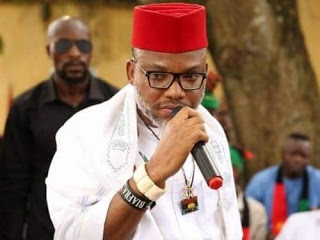 Mazi Nnamdi Kanu’s part is to speak forth the word and God brings them to pass. A prophet’s work is for a season and it is with a reason. God activated the gift he blessed Mazi Nnamdi Kanu with. A prophet is always with a message. The leader of the Indigenous People of Biafra (IPOB), is a visionary in his leadership. He is a true prophet of God for this appointed time with the mandate of liberating God’s children from bondage and restoring Biafra. A nation that will bring light to the entire continent of Africa.

A prophet is known when what he says comes to pass. What is happening in Nigeria today was foretold by Mazi Nnamdi Kanu  years ago between 2013 and 2014. He said then that the Fulanis will be armed with riffles and they will come down to kill his people (Biafrans) in order to take over their ancestral lands. Like play, it is happening before our very eyes today.

His prophecy in 2014 said and I quote him verbatim :

“As they campaign vigorously for elections, you would think, they are coming to grow the economy, enthrone justice, breed unity and tolerance, love for one another.

“No, they are coming to enthrone Hausa Fulani supremacy, to reposition the security agencies by sacking all competent hands and replace them with their kinsmen in order to drive their ethnic domination of the south, the Fulani herdsmen will be armed and encouraged to slaughter us with impunity and their masters will protect them.

“They are coming to ensure that my people are enslaved forever. Those who do not believe me will soon see it happen before their eyes”

Mazi Nnamdi Kanu said he will destroy Nigeria with the TRUTH and by the time he is done, Somali will be better than Nigeria. Again, it is happening! God said he will honor the word of his prophet and that is exactly what He clearly does when Mazi Nnamdi Kanu makes any declaration. So Nigeria should be careful not to provoke him to make more utterances.

It is been barely six months now when Mazi Nnamdi Kanu voiced out during one of his broadcasts on Radio Biafra, that: “There is a method to our madness. We will draw the Nigerian security forces down to the East/Biafraland, to fight us but by the time we are done with them, they will have no home to return to because Boko Haram terrorists and other monsters they created by themselves would have occupied their various villages in the North”

Abuja would soon be taken over by Boko Haram–Watch.

On Friday 23rd April 2021, was came a report that  gunmen suspected to be members of Boko Haram/ ISWAP attacked Gaidam town in Yobe state, shooting sporadically, a development that threw the entire ancient town into confusion with residents running for their dear lives.

It is known well that Gaidam town is the ancient home of the Nigeria Acting Inspector General of Police, Usman Baba Alkali. It therefore means that the acting IGP has lost his ancestral home land to BOKO HARAM/ISWAP ISLAMIC TERRORISTS.

Prophets are born with the gift to make prophetic utterances buried inside of them which can be activated at any time as it pleases God and according respective assignments. No wonder Bible scripture said that “A nation without a prophet perishes”. That will not be the case for our nation, Biafra. This also goes a long way to prove that Nigeria is not recognized by God as a nation because it is a wrong experiment orchestrated by the British colonialists.

Nigeria’s disintegration is the only workable solution to the myriad of problems confronting her today!

It is time for Biafra Restoration!

All hail Biafra the land of the rising Sun!!!