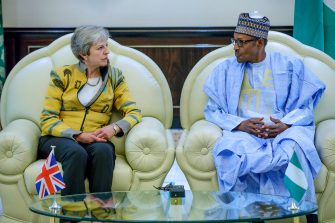 Nigeria’s flagged independence in 1960 was a well occastrated scam. Britain actually never left Nigeria to be independent. They are still smartly in charge of Nigeria, indirectly controlling the signature of power, and leaving the power to guns control in the hands of the Fulanis who annoyingly are not even an indigenous ethnic nation in Nigeria. Therefore, it is most suiting to say that Nigeria never had independence.
Going by the concept behind the creation of this contraption through a British company(Royal Niger) which later became Nigeria, we clearly see that Britain’s intention was never for the indigenous people within the boundaries of Nigeria to be independent. It is for the status quo to continue as long as they(Britain) have nothing to loose.
Britain has in her past and present actions justified the subjugation of the Indigenous peoples in Nigeria, making the country totally ungovernable through their unwavering support for any incompetent fulani persons to occupy the number 1 seat in Aso Rock, so long as the person is willing to say yes to their every demands.
Following the unfolding events from Nigeria now, one would want to ask what Britain really wants from this her renamed company, Nigeria? And common sense tells us that Britain established this Zoo contraption hell(Nigeria) of a country ‘solely’ to enrich themselves. And their wanton greed and double standards have kept them hooked up even after 61 years of a fake flagged independence.
This is the only reason Buhari who is now supervising a fulani ethnic cleansing agenda against every parts of Nigeria South, East, West and North has remained the president of Nigeria, because they know they can manipulate him to their favor. They are maintaining only their interests and allowing all sorts of evil and gruesome massacres to continue happening every day in Nigeria.
Like Mazi Nnamdi Kanu, leader of the indigenous people of Biafra tweeted some weeks back, Britain has no other interest in Nigeria aside to satisfy their greed. And that is why they need an idiot to remain in power as the president of Nigeria, so long as they have nothing to loose”.
If not for their absolutely wicked intents and plot to keep on subjugating the indigenous peoples in Nigeria, why would Britain, who sought referendum from the EU and it was granted, refused to support same for ethnic nations in Nigeria?
Time is ticking, Britain must know that subjugation of the Indigenous peoples in Nigeria for her gain might be for a moment more, but will not last forever. These generations of Nigeria entrapped ethnic nations are wiser now, especially in this new world of science and technology(21st century).
Currently, in the midst of all the insurgency, terrorism and extrajudicial killings in Nigeria, supported by Britain and evidenced by their actions in Nigeria, the people are beginning to understand whom their real enemy truely is.
Thank for a person like Mazi Nnamdi Kanu, Director of Radio Biafra who has done Immersely well in educating the public aright.
We now have a strong hope that there is victory at the end of the tunnel for the oppressed.
#FreeBiafra
#FreeOduduwa
#ReferendumNow
Written by Chukwu Julius Okey
Editted by Vivian Ezihie
For Family Writers Press International